That Weinstein guy... a fresh crop of single-panel comics at the Mercury News gives 14 cartoonists' takes on the celebrity sex crime of the moment.  My fave is this angler fish by Milt Priggee. 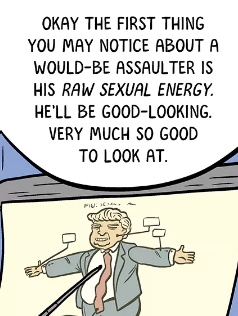 Thank you, Matt Lubchansky, for this cranky comic on The Nib in which our self-congratulatory president declares April 2017 Sexual Assault Awareness Month.

In 1986, when I was 12 years old, Oprah Winfrey came out as a survivor of sexual abuse. Her candor was stunning.  Her national talk show had been on the air for only one year, but she had already busted through the ratings set by talk show superstar Phil Donahue, a remarkable feat for a... END_OF_DOCUMENT_TOKEN_TO_BE_REPLACED

Released in 2014, this series of images by Syrian artist Saint Hoax shows Disney princesses kissing their fathers, or their fathers kissing them.  Intended to bring attention to child sex abuse by relatives,  the image captions state that 46% of minors who are sexually assaulted are victims of family members.  I don't love looking at... END_OF_DOCUMENT_TOKEN_TO_BE_REPLACED

The snarky Seanbaby shares "5 Comics from When Sexual Assault was Considered Hilarious" on cracked.com. He explains "From 1950 to 1968, there was a comic called The Adventures of Bob Hope. And for 109 issues, every single adventure started the same way: Bob Hope runs up to a strange woman and molests her."

Remember when we used to laugh with Bill Cosby?  There are a lot of editorial comics about our fallen hero these days.  You can see a nice collection at politicalcartoons.com.  Here are a couple from editorial cartoonists Mike Luckovich and  John Cole as featured in The Denver Post, Jan 4 2016.