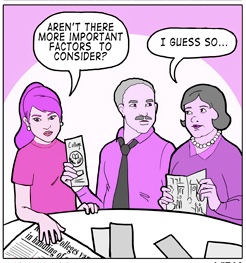 Cartoonist Rebecca Cohen drew this comic for an article in Vitamin W.  To determine which campuses are the best options for women, Vitamin W writer Padmini Parthasarathy and her team collected data on 80 US colleges. 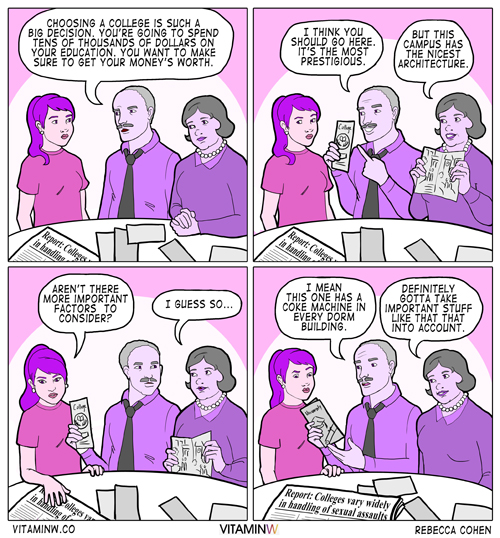 “We analyzed each school’s performance using several categories — including the ratio between male and female tenured professors, the presence of women in STEM programs, the reporting of sexual assault, and compliance with Title IX, and campus safety — to compile this list.”

A useful resource, but the results are a bit grim.  Seems to be hard to come up with a list of 10 schools with acceptable scores.  The correction to article is nearly as long as the article itself.

“CORRECTION; Ths list now has just nine colleges. Trying to find schools with a good record on sexual assault is shockingly difficult.  We’ve removed Columbia from this list because Columbia University is under investigation for mishandling many allegations of sexual assault. Recently, a student advocacy group was barred from protesting at a prospective student event. Originally, we had showcased U.C. Berkeley because of their innovation in STEM, safety programs and graduate gender studies department. However, we later learned of the pending federal complaints stemming from their mishandling of sexual assault. Columbia was a last minute decision. The sad truth is that very few colleges have a great record when it comes to handling sexual assault. This was a roadblock we kept hitting when researching this piece. In highlighting schools that we thought were handling these crimes (because without a shred of doubt, assault is a crime) properly, we wanted to prove that it is possible to do so. We apologize for this oversight and hope to find another 10th Best school.”

Of the 9 that made the final cut, 8 are private colleges.